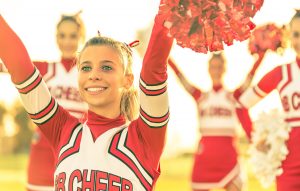 Alabama and Clemson have met each year for the past four years in the college football playoffs. Alabama has won two games; Clemson has won two. The aggregate score of the four games: Clemson 121 — Alabama 120. If Alabama hadn’t missed an extra point in last night’s game, the aggregate score would be tied. The two teams are so close that they might as well be one. Let’s call them Clembama.

Meanwhile, no other team has come close. The great teams of years past – Notre Dame, Oklahoma, Georgia, Southern Cal, Nebraska, and Texas – have all fallen by the wayside. When they match up against Clemson or Alabama, they don’t lose by inches. They lose by yards.

It seems counter-intuitive that luck should be more important in some situations than in others. Isn’t luck more or less random? Shouldn’t it apply equally in all situations? It’s true that luck is essentially random but when everything else is even, even a little bit of luck can make a huge difference. A funny bounce, an odd hop, a slippery field can determine who wins and who loses.

To see the difference, just look at the NFL, where skill is more evenly distributed. More specifically, look at Sunday’s game between the Chicago Bears and the Philadelphia Eagles. The Eagles were ahead by one point when the Bears maneuvered into position to kick a field goal near the end of the game. Make the field goal and the Bears win. Miss it and the Eagles win. The Bears kicked, the ball hit an upright, bounced downward, hit the crossbar, and then bounced back into the field of play. A bouncing football is a pretty random thing. If the ball had bounced off the crossbar and through, the Bears would have won. As it was, the Eagles won. In truth, luck – not skill –determined the outcome.

If Oklahoma, say, had made the same kick the last time they played Alabama, it would not have made a whit of difference. The game wasn’t close. The skill levels weren’t close. Luck didn’t matter.

Mauboussin’s paradox of skill states that: “In activities that involve some luck, the improvement of skill makes luck more important…” The paradox makes me feel somewhat humble. My business career was in the highly competitive computing industry, where skill is very widely distributed. As I look back on both my successes and my failures, I wonder how many were caused by skill (or lack of it) and how many were caused by luck. When I won, maybe it was because I was more skilled. Or maybe I just got lucky.

I first wrote about Clembama two years ago. Click here to find that article, which includes several links to Michael Mauboussin’s work.